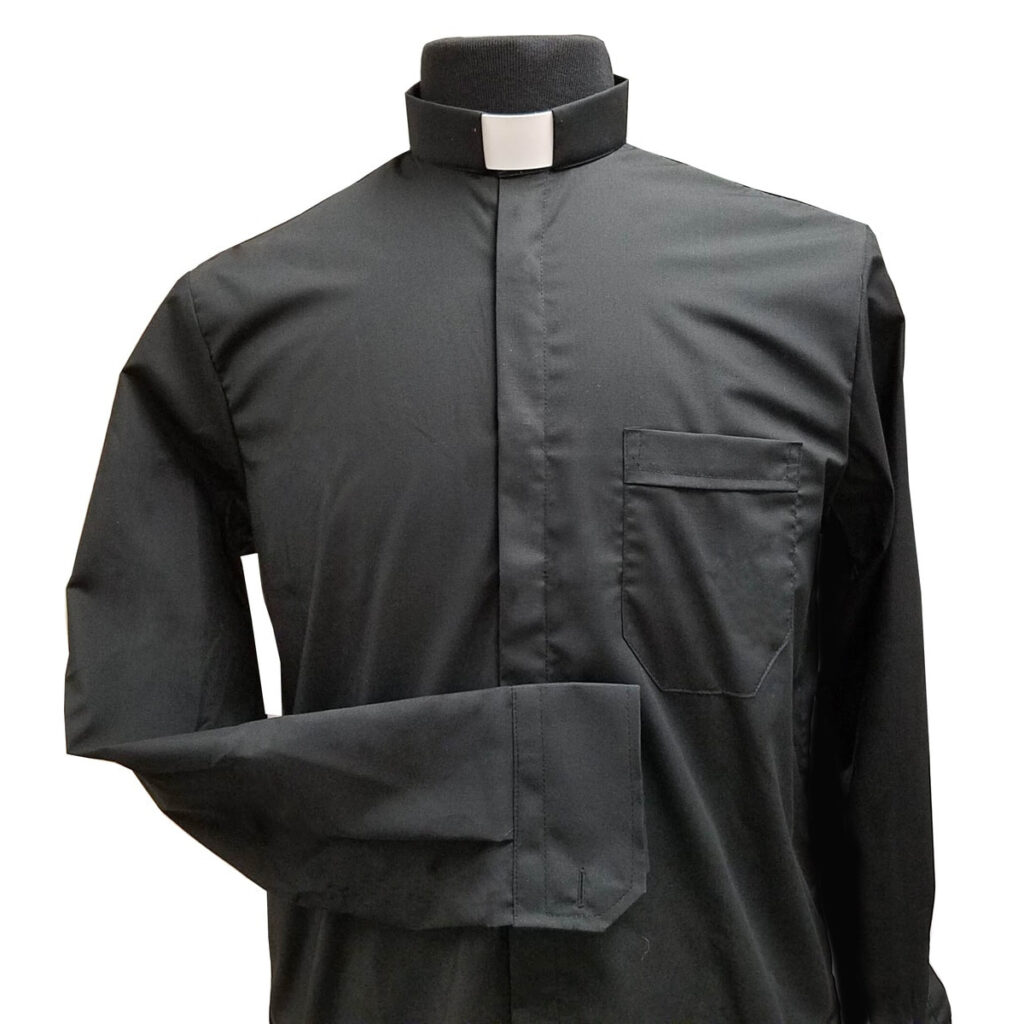 Depending on your familiarity with the clerical dress, you may or may not know the significance of clergy shirts. In the context of religious authorities, wearing of clerical dress conveys the unmistakable idea that the person in question is acting in their capacity as an official of the church.
Besides serving as a visible indicator of a priest’s role to members of the clergy, these shirts are often seen as a badge of service by the congregation. We will discuss the many types of clerical shirts and what you should know about them.

Clergy shirts can be classified into two categories: those with a neckband and those with a tab collar. You can find tab-collar shirts, sometimes called Roman collar shirts or Roman clergy shirts, with a high collar that forms a square at the neck in front, into which you can tuck a little white neck piece. As its name implies, this neck accessory is often formed of plastic because of its versatility.

The neckbanded shirt, in contrast, features a thin, white cotton wrap that resembles a fabricated turtleneck shirt around the neck. There are other variations on the classic black shirt, such as one with a removable white plastic neckband that fastens at the front with metal collar studs.

Since the origins of religion stretch back hundreds of years, it is not surprising to see that photos dating back a century or more have men wearing clothing similar to those worn by the Catholic clergy.

However, despite the historical importance of this style of clerical garb, there are other facts revolving around it that are worth knowing about.

Methodist and Catholic clergy members are known for their preference for black shirts. However, it’s acceptable for clergy to dress in all black; black shirts are the most common color choice.

Clergy members could be designated for a unique role within the church by the color of their clothing, and purple is often used for this. On the other hand, clergy. Clergy members typically feel more at ease when they refer to themselves as Bishops or Senior Bishops.

The traditional color for clergy to wear during funerals, baptisms, and other religious ceremonies and celebrations is white. However, clergypersons often don’t wear the white shirt beneath their cloaks and robes publicly but save it for religious services.

Those who have attained the rank of Bishop in the Christian church are customarily attired in a red shirt. Specifically, this is true of Catholic and Methodist ministers. Typically, a white collar is used with a red shirt.

Which one is for you?

Catholic Purchasing Services is aware that finding the correct clerical shirt is essential to feel and look your best and hence offers a wide range of options for customization. You can modify every clothing we sell to perfection for a perfect fit. Don’t hesitate to contact CPS if you require any clerical attire or robes.

Thank You for Ordering

Thanks for ordering with Catholic Purchasing Services. Please feel free to complete the quick 30 second survey below

Our mission is simple… to save you time and money on purchases.

As a national 501(c)(3), we’re here to offer any religious or educational non-profit access to our deeply discounted products and services and flexible payment terms – all delivered with fabulously friendly customer service!